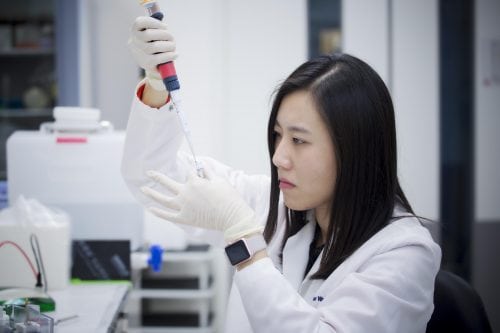 Another professor from the Faculty of Health Sciences (FHS), University of Macau (UM)， has made remarkable scientific discoveries. The research work of Dr Vivien Wang Ya-Fan, an assistant professor from the FHS, was recently published in Molecular Cell. A peer-reviewed scientific journal, Molecular Cell is a companion to Cell, the leading journal of biology and the highest-impact journal in the world. Molecular Cell covers research on cell biology at the molecular level, with an emphasis on new mechanistic insights.

Dr Wang has been working with the regulation of transcription factor NF-kappaB (kB) signaling pathways and its molecular mechanism for many years. The NF-kB family of transcription factors plays a critical role in the immune system by regulating various physiological processes involved in both innate and adaptive immunity, inflammation, cell survival and cell proliferation. Dr Wang’s recent research published in Molecular Cell, vol. 67, is titled ‘Bcl3 Phosphorylation by Akt, Erk2, and IKK Is Required for Its Transcriptional Activity’. Bcl3 is an oncoprotein and a specific co-regulator of NF-kB family. It is known nearly 25-years that aberrant Bcl3 activities induce malignancy and Bcl3 exists as phospho-protein in many cancer cells, such as breast cancer, colorectal cancer, lung cancer and etc. However, little is known about the regulation of its phosphorylation at molecular level and its integration into gene regulatory pathways. The present study resolved a long-standing question that how does Bcl3 functions as a transcriptional regulator through phosphorylation. Through the identification of 27 phosphorylation sites, this study has shown that at least 3 sites must be phosphorylated for Bcl3’s transcriptional function with NF-kB. In addition, Akt, Erk2 and IKK are the kinases catalyzing these phospho-modifications. This discovery adds a new axis to NF-kB activation signaling and reveals a direct link between PI3K-Akt and MAP signaling to NF-kB activation by targeting a single factor, Bcl3. Through the establishment of the convergence of these three intertwined signaling pathways onto NF-kB activation, it could potentially provide a theoretical basis for treating many diseases in the future, such as infectious diseases, immune diseases, tumorigenesis and different cancers.

Dr Wang is a research scientist from Macao. She finished her high school education in Macau Pui Ching Middle School and then continued her education at the University of California, San Diego, where she received her bachelor’s, master’s and PhD degrees. After that, she moved to Columbia University in the City of New York to work as a post-doctoral research fellow. In response to the Macao SAR government’s policy on nurturing local talent, she joined the FHS in September 2015. Since then, she has been engaged in various scientific research projects and has been training a new generation of scientists with the aim of advancing biology and health sciences in Macao. Dr Wang is also actively involved in science popularisation, which includes giving science lectures and designing science summer camp for secondary school students. This has helped local students gain valuable insights into university learning styles.