A team led by Professor Yutao XIANG in The University of Macau (UM) Faculty of Health Sciences (FHS) and cooperated with Professor Teris CHEUNG in The Hong Kong Polytechnic University (PolyU) and Professor Chee H. Ng in The University of Melbourne, investigated the mental health status among the older adults in Hong Kong during COVID-19 pandemic. The study explored the central depressive symptoms and their associations in the network of depression and compared the network structure differences between male and female older adults in Hong Kong during the pandemic. Since the situations in Hong Kong and Macao are very similar, the results of this study are undoubtedly a valuable reference to Macao. The findings could enable a more nuanced understanding of depression and provide a framework for developing interventions that target central depressive symptoms in older adults in both Hong Kong and Macao. The study was published in International Journal of Biological Sciences.

Mental health problems are common in older adults and associated with poor quality of life, impaired social functioning, and increased risk of chronic medical conditions. Since the COVID-19 outbreak, the Hong Kong Government has adopted a variety of public health preventive measures, such as the suspension of public transport, the closure of primary and secondary schools, and a total shutdown of non-essential places of public entertainment to mitigate the risks and impacts of the pandemic. All these measures and the ever-changing media reports on COVID-19 may increase the risk of mental health problems, worsen existing psychiatric symptoms, and heighten functional and cognitive impairments in older adults. Previous studies have found that public health emergencies such as the Ebola outbreak, earthquakes, and severe acute respiratory syndrome (SARS), can trigger mental health issues. The high prevalence of psychological comorbidities has been documented among older adults who are directly or vicariously exposed to life-threatening situations. Therefore, it is essential to pay special attention and provide timely interventions to this vulnerable subpopulation.

One recently developed approach to analyzing the relationships between disease symptoms is network analysis, an advanced framework that could also explain the onset and maintenance of psychiatric disorders. This approach assumes that psychiatric problems are constituted of co-occurring symptoms and their tendencies causally reinforce one another. Network analytic tools can tease out the inter-relationships between psychiatric symptoms from clinical data in a symptom network, where each symptom is a node and may have strong associations with one another, and relates significantly to other symptoms in the network. Specific links between two symptoms are defined as edges, which represent the strength of the relationship between symptoms. Node centrality index represents the connectedness of a given variable with all other variables in the network. Network analyses could examine the inter-relationships among different symptoms and their relative contributions to the model.

This study was carried out in Hong Kong using convenience sampling from March to April 2020, which included 3,946 participants aged 50 years old or above. Depressive symptoms were assessed with the Patient Health Questionnaire-9 (PHQ-9). They evaluated the centrality indicators for network robustness using stability and accuracy tests, and examined the potential differences between the structure and connectivity of depression networks in male and female older adults. They found that depressive symptoms were common in older adults in Hong Kong, particularly in women. In addition, Sad mood, Guilt, Motor problems and Lack of energy are the central nodes in the network structure that may trigger or sustain the rest of depressive symptoms among older adults during the pandemic. Moreover, significant gender differences were found in network global strength involving the following edges: Sad Mood–Guilt, Concentration–Guilt, Anhedonia–Motor, Lack of Energy–Suicide, Appetite–Suicide and Concentration–Suicide.

Yu-Tao XIANG, Teris CHEUNG and Chee H. NG are the corresponding authors of the article, and the former PhD student at UM, Yu JIN, is the first author. The full version of the research article can be viewed at https://www.ijbs.com/v18p3934.htm. 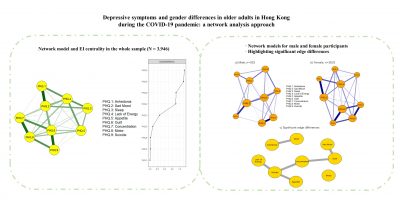 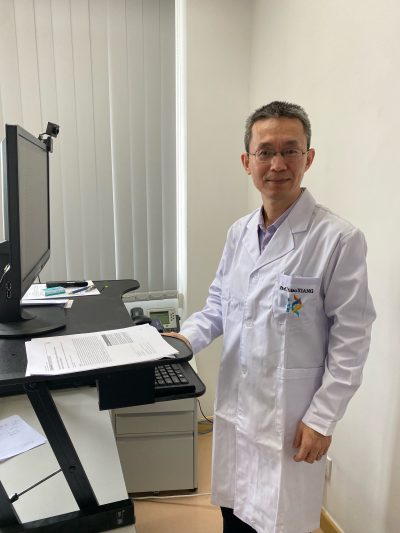