A team formed by researchers in the Faculty of Health Sciences (FHS) of the University of Macau (UM), the Department of Biology of the Southern University of Science and Technology (SUSTech), and the Department of Bioinformatics of Huazhong Agricultural University (HZAU) has reported significant discoveries on the establishment of three-dimensional (3D) genome structures during Xenopus tropicalis embryonic development. The research results will help people better understand the various defects and diseases caused by genetic abnormalities, such as the occurrence of cancer. The study has been published in the internationally renowned journal Nature Genetics.

Genomes fold into 3D architectural units known as topologically associating domains (TADs). This process is essential for precisely controlling gene expression inside cells. But when TADs fold abnormally, aberrant gene expression can occur, resulting in developmental defects and diseases, including cancer. Although TADs have essential biological functions, how they are formed is not fully understood. To examine the formation of TADs in detail, the researchers mapped the 3D genome structure of western clawed frogs, also known as Xenopus tropicalis. In the process, the team used high-throughput chromosome conformation capture (Hi-C) and gene silencing technologies to generate multiple 3D genome maps of the X. tropicalis during different developmental stages and under various perturbations during early embryogenesis.

The study has shown that the formation of TADs in X. tropicalis, in general, is similar to TAD formation in mice and flies. The X. tropicalis genome undergoes additional structural alterations during embryonic development, including the formation of active and repressive chromatin compartments as well as loops and stripes. Active transcription is critical for establishing TADs during human embryonic development. However, whether this process is also required for X. tropicalis TAD formation is unclear. The team has demonstrated that while transcription is necessary for normal embryonic development, it is not needed for forming TADs, highlighting stark differences in TAD formation across different species. They also showed that structural proteins, such as CTCF and Rad21, are required for establishing TADs during embryonic development. In addition, they have found that ISWI, a chromatin remodeling factor, enhances CTCF binding, TAD formation, and embryogenesis. These results suggest that chromatin remodeling is pivotal for de novo 3D genome structure organisation in X. tropicalis. Finally, the team showed TAD structures are different between the various tissues of X. tropicalis, such as the brain, the liver, and sperms.

Edwin CHEUNG, a professor in the FHS; Chunhui HOU and Yonglong CHEN, two associate professors at SUSTech; and Li LI, a professor at HZAU, are the corresponding authors of the study. The project was funded by the Science and Technology Development Fund, Macao SAR (file number: 0011/2019/AKP) and UM (file numbers: MYRG2018-00033-FHS and MYRG2020-00100-FHS). The full version of the paper can be viewed at: https://www.nature.com/articles/s41588-021-00878-z 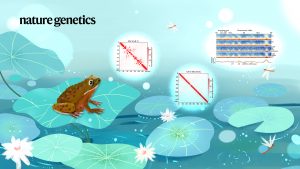 An illustration of the mapping of the Xenopus tropicalis genome structure in 3D (reproduced with permission from sustech.edu.cn) 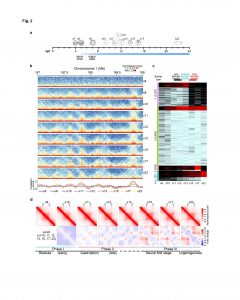