A team led by Chair Professor Chuxia DENG in the University of Macau (UM) Faculty of Health Sciences (FHS) has explored the role of mechanism of FGFR2 activation in tumor initiation and progression and the underlying causes of resistance to targeted therapies, and has developed combination targeted therapy with immunotherapy for Triple-Negative Breast Cancer (TNBC). The study has been published in the prestigious journal Advanced Science.

Breast cancer is a leading cause of cancer morbidity and mortality of women worldwide, among them, TNBC is known as one of the subtypes of breast cancer that is most difficult to treat. This is due to the absence of good targets, among of its strong invasion, poor efficacy, easy to relapse and metastasis, and high mortality. Although there are number of methods to treat breast cancer, current approaches in therapies for TNBC is still a real “hot potato”. Thus, it is urgent to further study and identify certain drivers of initiation and progression for TNBC.

Breast cancer has four primary molecular subtypes, including Luminal A, Luminal B, HER2-enriched and TNBC. FGFR2 is one of four membrane-bound receptor tyrosine kinases (RTKs) that mediate the signaling of over 22 fibroblast growth factors (FGFs). Multiple genetic aberrations in FGFR2 activate upstream and/or downstream FGFR2 signaling pathways, such as PI3K-AKT, MAPK, and mTOR signaling. Prof. Deng’s team has used Cre-LoxP mediated mammary specific activation of FGFR2 signaling for studying its role in mammary gland development, tumor growth and metastasis. After one to one and a half years, the Fgfr2-S252W mice gradually developed mammary tumors. Hence, Fgfr2 activation stochastically induces mammary tumorigenesis after a long latency. Following that, the researchers characterized the mammary tumors associated with Fgfr2 activation by analyzing the histological features of those that developed in the Fgfr2-S252W mice, and about 50% of the tumors were TNBC. Hence, the researchers established FGFR2-S252 mouse model for TNBC. The team investigated the molecular mechanism by which Fgfr2 activation induces tumorigenesis and analyzed the transcriptional profiles in the mammary glands. Bioinformation revealed pathways related to epithelial cell differentiation, proliferation, inflammatory response, MAPK cascade, chemokines, and so on. In addition, the team found that FGF/FGFR2 signaling drives the development of triple-negative breast cancer accompanied by epithelial-mesenchymal transition that is regulated by FGFR2-STAT3 signaling and suppresses BRCA1 via the ERK-YY1 axis and promotes tumor progression. Furthermore, FGFR2/STAT3 promotes expression of PD-L1 to shape TME. The researchers have finally established the tumor slice culture platform for rapid evaluation of the Therapeutic Efficacy of combination targeted therapy with immunotherapy for triple-negative breast cancer. 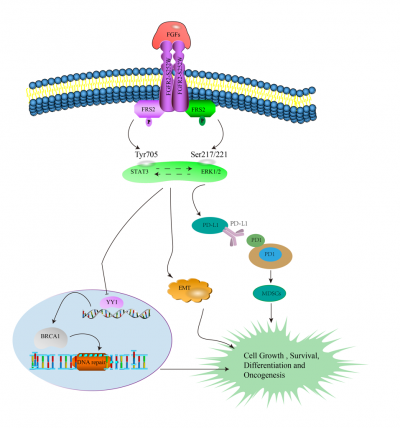 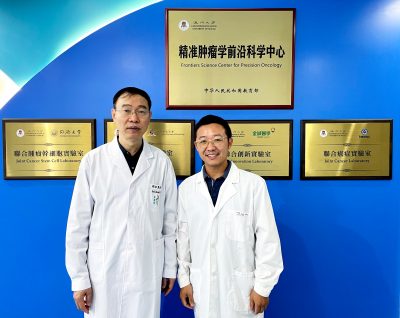