A team formed by students in the University of Macau (UM) Faculty of Health and Sciences (FHS) and Faculty of Science and Technology (FST) recently won a gold medal at the International Genetic Engineered Machine (iGEM) Competition, for the second consecutive year. The team was also ranked among the top five in the Environment Track of the competition. This year’s event attracted 249 teams from more than 40 countries and regions.

Under the guidance of FHS Assistant Professor Leo Lee Tsz On as well as Associate Professors Xie Ruiyu and Liu Tzu-Ming, the students designed a biofilm-removing system that uses genetically modified Escherichia coli (E. coli) to clean aquariums. Biofilm growth is a serious problem in water tanks, aquariums, and water pipes. It not only intensifies the colour and turbidity of the water, but also promotes the growth of germs. The team successfully developed a genetically engineered strain of E. coli to equip it with both detection and degradation functions so that it can remove biofilms attached to water tanks or pipes. To make the degrading system safe to use, the students designed a magnetic recovery system and proposed incorporating ferritin expression into the genetically modified E coli so that the germs can be effectively recycled after degrading the biofilms.

Feng Yuzhao, leader of the UM team and a third-year student in the FHS, admits that it was challenging to work on the project during the COVID-19 pandemic. However, all team members worked very hard, and eventually their efforts paid off. The students say they have benefited greatly from participating in the competition, because it has helped them grow, both academically and personally.

The UM students spent almost a year preparing for the competition. Besides laboratory work, they also participated in various external activities, including a site visit to Chimelong Ocean Kingdom and a video conference with representatives of Ocean Park Hong Kong. They also gave science lectures at high schools in Macao, encouraging high school students to solve problems that face humanity by pushing the boundaries of synthetic biology. In addition, the UM team and five other teams from educational institutions, namely Dalian University of Technology, the Southern University of Science and Technology, Tsinghua University, Wuhan University, and Tsuen Wan Public Ho Chuen Yiu Memorial College, have established an Anti-biofilm Community, through which the teams hope to exchange ideas and create collaborations to increase their knowledge of synthetic biology.

Prof Lee, Prof Xie, and Prof Liu also trained a team from Pui Ching Middle School (Macao) for the competition. The team also received a gold medal for a flame retardant protein production system they developed. Throughout the year, the team worked on the project in UM’s laboratories during their spare time.

The iGEM Competition is an international interdisciplinary competition that requires knowledge in synthetic biology, mathematics, computer sciences, and statistics. It was founded by the Massachusetts Institute of Technology in 2004 and became a global competition in 2005. 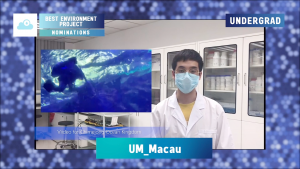