A team led by Associate Professor William Chong Hang CHAO at the University of Macau (UM) Faculty of Health Sciences (FHS) has identified a new type of V. parahaemolyticus toxin RhsP, which undergoes autoproteolysis to trigger a dramatic conformational change and promotes its own dimerization. This process significantly contributes to the T6SS2-mediated prey targeting by V. parahaemolyticus. The results uncover new insights into Rhs-type toxin release triggered by autoproteolysis and help understand how V. parahaemolyticus infects human guts by killing and outcompeting the host microbiota. The research findings have been published in the internationally renowned journal Cell Reports.

Around 2.4 billion people worldwide contract gastroenteritis each year. A major cause of the disease is the consumption of seafood contaminated by the Gram-negative bacterium Vibrio parahaemolyticus. In order to gain entry and colonize the human guts, V. parahaemolyticus releases toxins through its type-VI secretion system (T6SS) to kill the intestinal flora, thereby creating living space and reducing competitions in the human guts. The research team led by Prof. Chao’s research team identified a new type of V. parahaemolyticus toxin RhsP, which releases a C-terminal nuclease domain RhsPC to kill neighboring bacteria. The bacterium avoids suicide and protects itself from its own RhsP toxin by producing a cognate immunity protein RhsPI. The RhsP toxin is a huge protein with 1381 amino acids and a molecular weight of 157kDa. It mainly composes of a huge β barrel structure, which encapsulates key catalytic elements required for autoproteolysis.

Supported by the Shanghai Synchrotron Radiation Facility of the Chinese Academy of Sciences, the UM team applied X-ray crystallography to determine the atomic structure of the RhsPC-RhsPI toxic-immunity pair, illustrating how the immunity protein RhsPI protects the host by utilizing its acidic surface to block the basic nuclease active site. This is the first protein complex structure determined by X-ray crystallography in Macao.

In addition, the research team collaborated with Dr. Jun HE, a researcher at the Guangzhou Institute of Biomedicine and Health (GIBH) of the Chinese Academy of Sciences, to apply cutting-edge cryo-electron microscopy (cryo-EM) techniques to determine the structures of the RhsP toxin in its pre-autoproteolysis and post-autoproteolysis forms. The team discovered that autoproteolysis triggers a dramatic RhsP conformational change, which promotes its own dimerization. Using complementary genetic experiments, the team confirmed that RhsP dismerization is required for the release of the C-terminal toxic nuclease and the T6SS2-mediated prey targeting by V. parahaemolyticus. These structures are the first cryo-EM protein structures determined in Macao and help lay the mechanistic foundation of Rhs-type toxin release via the type-VI secretion system (T6SS). 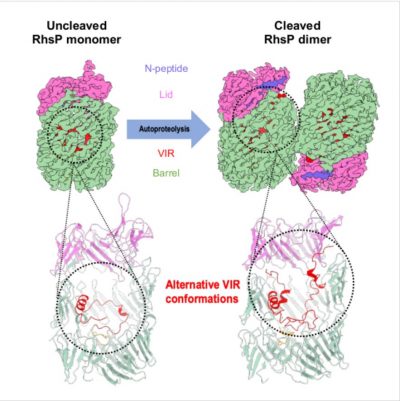 Autoproteolysis triggers a dramatic conformational change of the RhsP toxin, which promotes its own dimerization. This process is required for T6SS2-mediated prey targeting by V. parahaemolyticus. 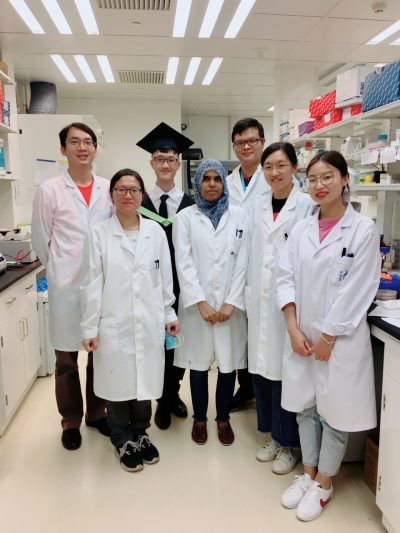