A team led by Elaine Lai-Han LEUNG, Professor of the University of Macau (UM) Faculty of Health Sciences (FHS), Ying XIE, Professor of Second Affiliated Hospital of Guangzhou University of Chinese Medicine, and Jianxin CHEN, Professor of Beijing University of Chinese Medicine made significant progress in the treatment of sepsis with traditional Chinese medicine (TCM). This study found that herbal formula BaWeiBaiDuSan (BWBDS) alleviates polymicrobial sepsis-induced liver injury via increasing the gut microbiota Lactobacillus johnsonii (L. johnsonii) and regulating macrophage anti-inflammatory activity in mice. The discovery holds promise for protecting patients with sepsis, such as pregnant women, neonate and patients with postoperative infections, from deadly infections caused by pathogenic bacteria. The study has received considerable attention in the field of pharmacology and has been published in Acta Pharmaceutica Sinica B.

Sepsis is widely perceived as a life-threatening organ dysfunction that is caused by a dysregulated host response to infection. Antibiotics is an essential component of initial therapy in sepsis. However, inappropriate use of antibiotics can lead to multidrug-resistant infections and death. Therefore, it is necessary to discover novel targeted therapeutic strategies. The gut-liver axis refers to the bidirectional relationship between the microbiota, metabolic and immune crosstalk between the gut and liver, connected in a bidirectional fashion by the portal vein and biliary tree. Sepsis-induced liver injury (SILI) is related to adverse clinical outcomes. Gut microbiota plays a crucial role in SILI. BWBDS is an effective formula of Chinese medicine based on the database of postoperative recovery phenotypes-efficacy of traditional Chinese medicine. BWBDS was extracted from a formula of Panax ginseng C. A. Meyer, Lilium brownie F. E. Brown ex Miellez var. viridulum Baker, Polygonatum sibiricum Delar. ex Redoute, Lonicera japonica Thunb., Hippophae rhamnoides Linn, Amygdalus Communis Vas, Platycodon grandiflorus (Jacq.) A. DC., and Cortex Phelloderdri. The team’s previous studies have shown that the TCM formula with the medicine food homology can improve the intestinal microecology and enhance the immune function. Currently, adjusting the intestinal microecology is a hot topic in drug research, and gut microbiota can be used as a biomaker to predict the prognosis of surgery. Herein, the team investigated whether the BWBDS treatment could reverse SILI by the mechanism of modulating gut microbiota.

The team’s findings provide a novel therapeutic approach for septic liver injury. In the foreseeable future, gut microbiota status, such as species diversity, will be used as a biomarker to predict the BWBDS therapy effects in sepsis patients. In addition, BWBDS and the gut bacterium L. johnsonii represent novel prebiotics and probiotics to therapy in sepsis patients and can be translated to clinical use in a short period of time. This study revealed the great potential of TCM in treating sepsis by regulating gut microbiota.

Prof. Elaine Lai-Han LEUNG, Prof. Ying XIE and Prof. Jianxin CHEN are the co-corresponding authors of the study, and the PhD students Xiaoqing FAN, Chutian MAI of Macau University of Science and Technology and the PhD students Ling ZUO of Beijing University of Chinese Medicine are the co-first authors. This work was funded by the Science and Technology Development Fund, Macao SAR (File No. 0096/2018/A3, 0111/2020/A3, 0056/2020/AMJ and 001/2020/ALC) and UM (SRG2022-00020-FHS, China). It is also supported by 2020 Young Qihuang Scholar funded by the National Administration of Traditional Chinese Medicine. The full version of the research article and the ‘News and Views’ article can be viewed at https://doi.org/10.1016/j.apsb.2022.10.01 and https://www.sciencedirect.com/science/article/pii/S2211383522004427, respectively. 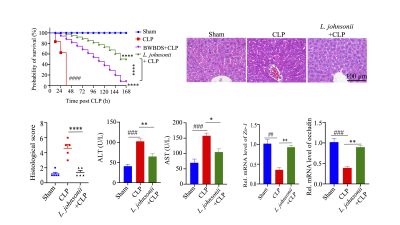 BWBDS protected mice against CLP-induced death and liver injury and selectively promoted the growth of Lactobacillus in CLP treated mice. 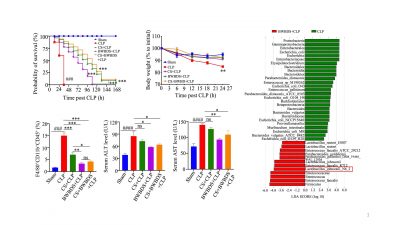 Treatment with L. johnsonii significantly prevented mice from sepsis and SILI and improved the survival of mice, which associated with the enhanced gut integrity. 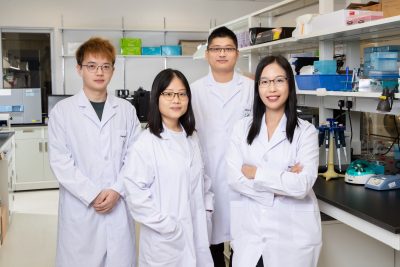