A research team led by Chuxia DENG, dean of the University of Macau (UM) Faculty of Health Sciences (FHS), recently found that breast cancer susceptibility gene 1 (BRCA1) plays an important role in regulating mitophagy and mitochondrial dynamics: it maintains a healthy mitochondrial network and reduces inflammasome activity, which blocks the recurrence and metastasis of breast cancer after surgery. The research study was sponsored by the National Natural Science Foundation of China, UM, and the Macao Science and Technology Development Fund. It has been published as a cover article in the well-known international journal Advanced Science.

According to statistics from GLOBOCAN, a project of the International Agency for Research on Cancer, there were about 18.1 million new cancer cases worldwide in 2018, with 9.6 million deaths. Among these cases, 2.1 million were female breast cancer cases, with 630,000 resulting in death. The most common cancer in women, breast cancer is classified into six main intrinsic subtypes based on the genes a cancer expresses. Triple negative breast cancer (TNBC) is cancer that does not express the genes for estrogen receptor, progesterone receptor, and human epidermal growth factor receptor 2, which represents 10.0 to 20.8 per cent of all breast cancers. Because of the lack of specific therapeutic targets, TNBC is the most malignant and lethal, making it extremely urgent to find novel and effective targets for TNBC treatment.

BRCA1 is a major tumour suppressor gene and plays a critical role in maintaining genomic stability. BRCA1 mutation is the most common cause of hereditary breast cancer, and women with BRCA1 mutation have an increased risk of developing breast cancer, most of which are TNBC. The UM team conducted a study using a BRCA1 mammary-specific knockout mice model, and found that BRCA1 plays an important role in regulating mitophagy and mitochondrial dynamics: it maintains a healthy mitochondrial network and reduces inflammasome activity, which blocks recurrence and metastasis of breast cancer after surgery.

Mitochondrion is a double-membrane organelle found in most eukaryotic organisms. Mitochondria as dynamic organelles are constantly undergoing fission and fusion, which are essential for maintaining mitochondrial network. Mitochondrion is not only the power plant of cells, but also plays an important role in cell signal transduction and cell death. Therefore, maintaining healthy mitochondria is vital to cellular health. Recent studies have shown that mitophagy is the selective degradation of mitochondria by autophagy, which is crucial for maintaining mitochondrial function and cellular integrity. This study indicates that BRCA1 has dual roles in regulating mitochondrial dynamics. In nucleus, BRCA1 negatively regulates key components of mitochondrial fusion machinery such as mitofusin 1/2. In cytoplasm, BRCA1 translocates to the outer membrane of mitochondria and promotes fission and mitophagy after mitochondrial damage. Unbalanced mitochondrial dynamics leads to elongated mitochondria and prevents isolating damaged organelles from healthy mitochondrial network in BRCA1 mutant cells. It further demonstrates that BRCA1 deficiency leads to defective mitophagy, accumulates damaged mitochondria, and increases reactive oxygen species in mammary cells, thereby causing excessive inflammasome activation to establish tumour-associated microenvironment for recurrence and metastasis. This suggests that inflammasome inhibition could serve as a therapeutic target for the treatment of BRCA1-associated breast cancer. The study was jointly conducted by a group of scholars, including FHS Dean Chuxia DENG, Associate Professor Xiaoling XU, and Senior Instructor Qiang CHEN (also the first author). For details about the paper, please visit https://onlinelibrary.wiley.com/doi/10.1002/advs.201903616.

Prof. Deng is the dean of the FHS at UM. Between 1995 and 2014, he served as a tenured researcher at the United States National Institutes of Health (NIH) and the director of its genetics research laboratory. An expert in breast cancer research, Prof. Chu has been long involved in the studies of the molecular mechanisms for breast cancer occurrence and development, drug resistance, and metastasis. He has published 380 papers with an h-index of 131 on Google Scholar.

Dr. Chen is a senior instructor in the FHS. He obtained his PhD degree in cell biology from Xiamen University and received post-doctoral training at the NIH. His main research interests are cancer development and metabolic disorders. 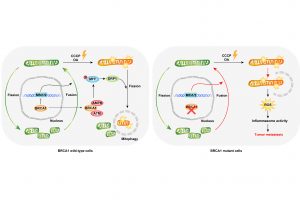 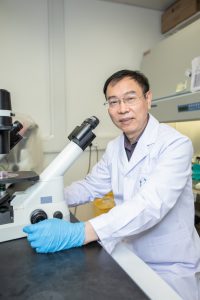 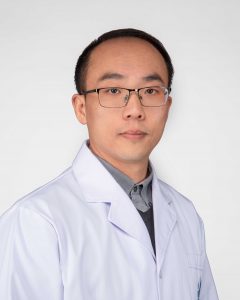