The UM team is actively preparing for the 2022 iGEM Competition

A group of 24 students from the University of Macau (UM) Faculty of Health Sciences (FHS) are now preparing for the 2022 International Genetically Engineered Machine (iGEM) competition. This will be the fourth time FHS students participate in this worldwide synthetic biology competition. Under the guidance of Associate Professor Leo Tsz On LEE and Professor Garry WONG, the team is getting ready for the 2022 competition. The aim of their project is to reduce the acidity in water environment.

Ocean is the body of saltwater that covers more than two-third of the Earth’s surface. It plays an essential role in providing oxygen and absorbing carbon dioxide, climate regulation and food source. However, since ocean absorbs around 50 times more carbon dioxide than the atmosphere, the overwhelming carbon dioxide being absorbed by the ocean under massive carbon dioxide emission consequently reduces the carbonate amount within the seawater and declines the oceanic pH. The rapid pace of ocean acidification significantly affects the marine lives by destroying their shells and skeletons, as well as the marine food chain and ecosystem. Meanwhile, ocean acidification may as well engage negative impacts on the human societies. For instance, the continuation of this acidification will lower its ability in absorbing the atmospheric carbon dioxide, making the ocean being less effective in regulating the climate change. The UM iGEM team would like to make approaches to remove or recycle the H+ ions from the ocean and make this technique applicable to also lakes and rivers.

The iGEM was founded in 2003 as an intersession course at Massachusetts Institute of Technology. It became a summer competition in 2004 and has been a global competition since 2005. By participating in the iGEM competition, students not only gain knowledge of synthetic biology but also gain experience in completing a project and applying the result in the real-world scenarios is hoped that.

The chemical reaction of carbon dioxide in the ocean 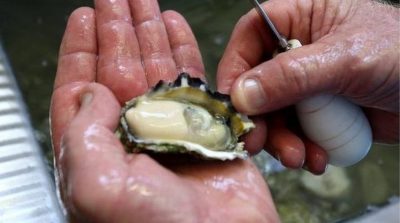 Ocean acidification softens the shells of the creatures