According to Ge Wei, vice rector (research) of UM, the Greater Bay Area is one of the medical technology centres in China and UM plays a vital role in its development. To facilitate the implementation of the national strategy, UM is committed to developing biomedical sciences and training outstanding professionals in related fields. He also mentioned UM’s being ranked No 11 among all higher education institutions in mainland China and Macao according to the Times Higher Education World University Rankings, showing international recognition of the university’s growing reputation.

FHS Dean Deng Chuxia said that the conference had gone through several alterations because of the epidemic, adding that the persistence of all colleagues and the patience of the invited speakers and other participants were key to the success of the event. He also said that the conference provided a platform not only for scientists, experts, and researchers from the Greater Bay Area and other regions to share their latest research findings, but also for students to exchange ideas with renowned scholars.

The two-day conference included three keynote speeches and 17 session talks. Prof Rudolf Jaenisch, a world-renowned scientist and a member of the United States National Academy of Sciences, delivered a speech on the genomic integration and expression of SARS-CoV-2 into patients’ genome and how it affects nuclear acid tests. Prof Song Erwei, an eminent scholar and a member of the Chinese Academy of Sciences, gave a speech on tumour ecology and immunotherapy and discussed breast-conserving surgery for breast cancer and its significance. Prof Wu Jun, a scholar at the University of Texas Southwestern Medical Center, revealed how to increase chimera formation by increasing the competitiveness of xenogeneic cells in a host embryo, which is crucial for the generation of human organs in animals. The session talks covered a wide range of topics, such as converting fibroblasts to cardiomyocytes by using small chemicals, using cancer patients-derived organoids for precision diagnosis and therapy, new findings about the early-stage post-transplantation of hematopoietic stem cells, and the triggering of anti-viral response following the binding of M protein of SARS-COV-2 virus to TREM-2 on T lymphocytes of the host.

This year, the conference’s review and award committee received over 100 entries, including over 70 posters and 30 research images. Dr Xing Fuqiang, a UM alumnus who is currently a postdoctoral fellow at the Fifth Affiliated Hospital of Sun Yat-sen University, and 11 other young scholars, received the Best Poster Award. Huang Borong, a PhD student at UM, and four other young scholars, received the Best Image Award. 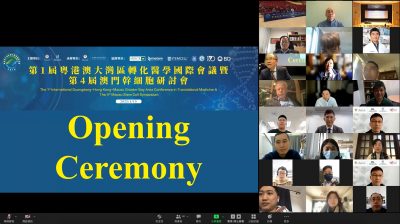 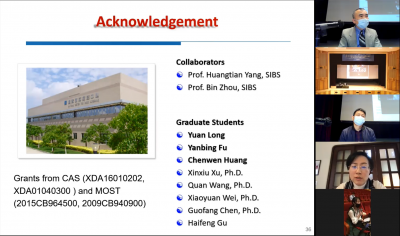