The students from the Faculty of Health Sciences (FHS), the Faculty of Business Administration (FBA) and the Faculty of Arts and Humanities (FAH) of the University of Macau (UM) are now preparing for the 2021 International Genetically Engineered Machine (iGEM) competition. The objective of their iGEM project is to reduce the high purine content of beer, while maintaining the taste and aroma in it.

Purines can be found in food such as certain types of meat, seafood and beer. When we consume these food, our bodies absorb the purines and go through a series of reactions to break down the purines. The end product of the reactions is uric acid which will be excreted out in urine. When there is problem in the balance of the production and excretion of uric acid, this will lead to a high level of uric acid in blood, effectuating the formation of crystals. These tiny, hard and sharp crystals deposit in joints and rub against the soft lining of the joints, eventually causing a lot of pain, swelling and inflammation in joints, which is known as gout.

Consuming beer is associated with a higher risk of gout as beer contains a higher level of purines. The purines, which are mainly composed of purine bases and purine nucleosides, come from the breakdown of malt nucleic acids when the grains are crushed for beer brewing. During beer fermentation, the yeasts are used for giving beer its alcohol content and carbonation. Interestingly, the yeasts also absorb the purine bases in the brew; yet, the yeasts do not absorb the purine nucleosides, leaving a high level of purines in the beer.

In order to reduce the purine nucleosides in the beer, the UM team decided to bio-engineer the yeasts. This involves the insertion of a new gene that encodes an enzyme called purine nucleoside phosphorylase (PNP) in the yeasts so that the yeasts can gain a new function to produce and release PNP to the brew. The released PNP can then convert the purine nucleosides to purine bases which can be absorbed subsequently by the yeasts. PNP also exists in the human body and is a crucial enzyme in purine metabolism. Studies have found that PNP deficiency in human can associate with immunodeficiency. With the insertion of the PNP gene, the bio-engineered yeasts now have ways to remove both the purine bases and purine nucleosides from the brew, and this beer with lower purine content can become a healthier alternative for drinkers, especially for those who are sensitive to the purine content.

The iGEM competition encourages students to design their projects using the standard, interchangeable pieces of DNA called as BioBricks to deal with issues they are now facing. In this competition, teams have to work together to design, build, test and measure a system of their own design using the BioBricks and standard molecular biology techniques. 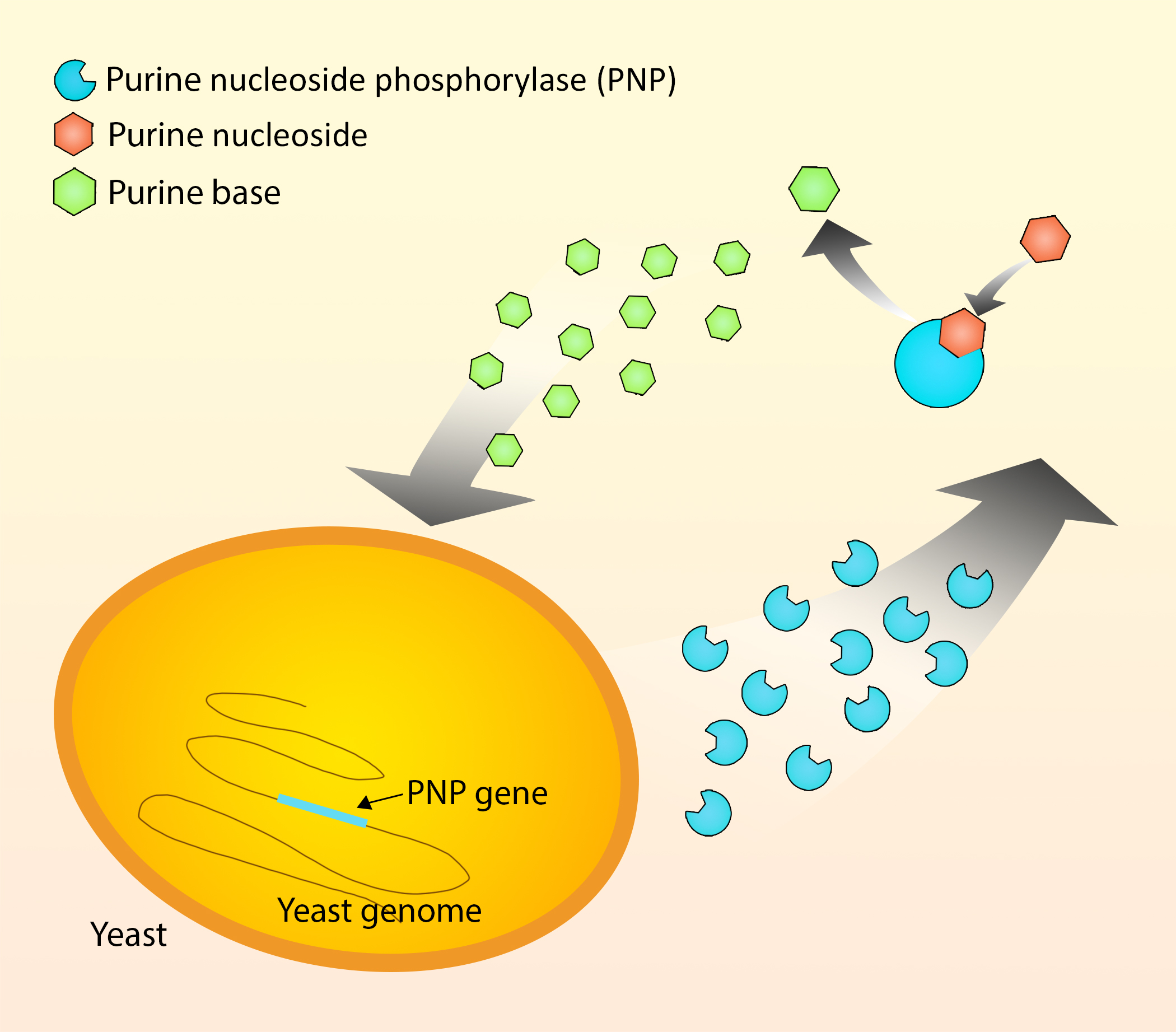 The mechanism of GM yeast produce and release PNP to the brew.